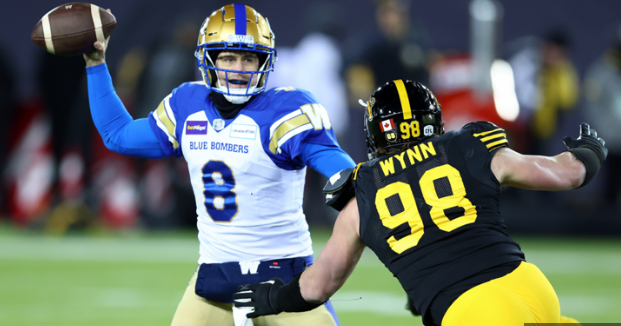 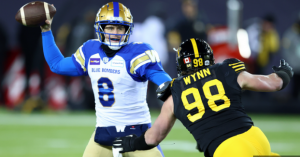 Zach Collaros did amazing work for the winners. He completed 240 yards with 21 passes and 2 touchdowns and two interceptions. He showed the world why he is the best player in the CFL.

They got a two-point conversion from this, which gave the Blue Bombers lead. In the overtime, they intercepted Hamilton’s Jeremiah Masoli to confirm their victory. the wind also played an important role in the match. The wind was very strong in Hamilton. Winnipeg receiver Rasheed Bailey said,

The defense of the Bombers was one of the best of this season. defensive lineman Jackson Jeffcoat said, “The defense has been bringing it all year,” he said. “We wanted a little bit of the spotlight so we had to get down and dirty.”

“But coach O’Shea said at halftime, ‘We’re going to take the wind in the fourth quarter,’ and we got the job done.” “This is special. I want to sit out here and embrace this.” “The wind was tough, in the third quarter we couldn’t get anything going because of the wind.”

The Blue Bombers were 25-22 ahead, the Bombers didn’t do anything wrong to win the trophy. With the win of the 108th Grey Cup, they have won the most prestigious trophy of the CFL 12 times.

“I was sitting there in the locker room before the game just thinking to myself, ‘Man, I really love these guys and we have to win,”‘ Collaros said. “I was kind of emotional about it.”

Hamilton was in the lead before the first half. A 12 yard TD from Masoli gave hamilton a 10-7 lead just 15 seconds before halftime. He entered the game after the injury of Dane Evans. Masoli played for 185 yards with 20 passes. He finished the match with 2 touchdowns and one interception.